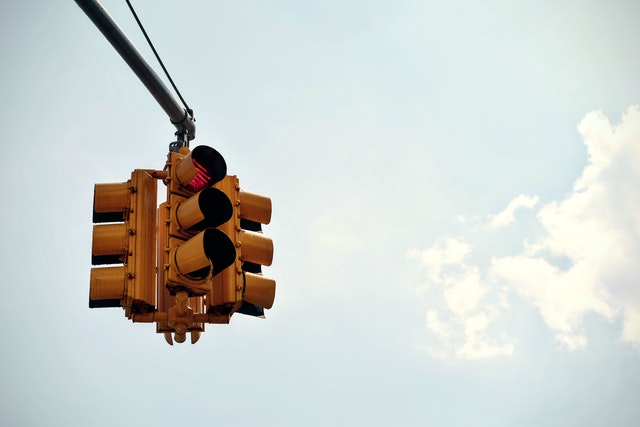 If you’ve been riding very long, it’s something that you’ve dealt with: sitting at a stoplight waiting and waiting for the signal to change. You sit there for seemingly ages, occasionally glancing at your mirrors. Nervously checking so you don’t get a rear-ender surprise. Peering down the road in either direction to see if you can get away with just zipping out into a gap in traffic. We’re here to help you with that case of the Stoplight Blues.

Why We Have The Stoplight Blues

In truth, cities have optimized intersections for cars and trucks. It’s no surprise to motorcyclists that traffic engineers forget to tune the traffic equipment to recognize something as small as a motorcycle. There are several types but one commonly-used today is the induction-loop type, and its type that’s most likely to fail to recognize motorcycles. Induction system embed loops in the pavement and sense when a large metal object is above them by detecting the change in capacitance of the wire. Whenever a large metal object changes how the magnetic field in the loop flows, the sensor interprets this as a vehicle. This works fantastically for trucks and works well enough for cars. It also works about as well as you might expect for motorcycles built most from non-ferrous metals.

For induction-loop sensor intersections, these are one of the easiest systems to identify. Where intersections with visual detection systems have several cameras placed to monitor traffic, these may also be for red-light cameras. For induction-loop systems, there will almost always be circles, rectangles, or squares cut into the pavement. On concrete roadways they will be particularly obvious; crews lay concrete down first, cuts gaps for the loop, then seal with tar.

Note: You’ll find a wide variety of products with wild claims of efficacy which may or may not make it easier for inductive loops to detect your motorcycle. I’m skeptical of most of these, but there’s a few generally sound strategies for not getting stuck at any sensor-loop stoplight.

While it might seem obvious, check the intersection you’re approaching for markings on the pavement with a line and a bicycle. If you see those, just put your front wheel there. Traffic engineers put extra wires there to detect the tiny amount of metal in a bicycle wheel. Your motorcycle will have more than enough to do the job, unless you’re running Marchesinis. If you’re commuting on those, we should talk.

If you don’t have something as useful as a bicycle line for a circular loop, place the front wheel of your motorcycle right along one side of the loop. Aligning the front wheel with the loop maximizes the amount of metal that’s closely aligned with sensor wire.

Some riders extend their kickstand to touch the pavement on top of the loop. I don’t know if this one works for all bikes, but if your kickstand is steel it may help. Experiment and see if that works as well as lining your wheel up with the sensor.

Additionally, some states and municipalities have specifically written laws concerning stoplights. These laws allow motorcyclists to proceed through intersections that do not recognize their bike if safe to do so. Keep in mind that if this is allowed in your area, this is definitely not universally allowed across all areas. I also suggest keeping a copy of the local relevant law in your tankbag. The local police officers often don’t know those laws very well.

We definitely and definitively do not recommend using devices that flip lights over to green. These are devices that are intended for emergency vehicles, and represent an abuse of public infrastructure. These devices are also illegal for private citizens to own in many places. Many of products offered online may well just be a scams anyway.

In all things motorcycling, operate your vehicle in a manner that is safe for you, your passengers, and other motorists and pedestrians. We have a responsibility to operate our vehicles in a respectful manner if we want to continue to have the privilege of riding our preferred mode of transportation.