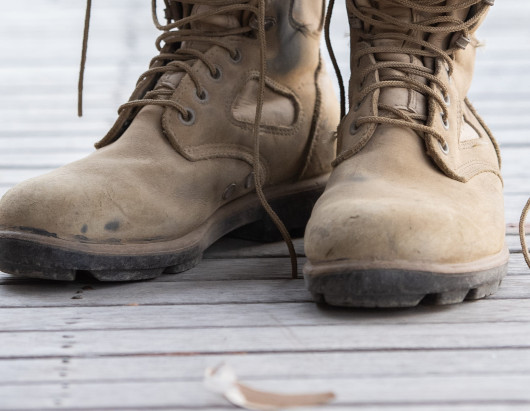 Those of us commuting on our motorcycles though, we need to find a way to ride both comfortably and well-protected. This protection extends to the impressions that we leave with our co-workers when we get there. In most companies we won’t impress the CEO by looking like we just came off the grid at Sepang.

In the spirit of keeping us on the road and in one piece while also keeping us gainfully employed, here’s a few key thoughts and possibilities around motorcycle footwear.

Rubber SoLE, And Not The Beatles

On various forums, rubber soles seem to be talked about at length for dampening vibrations. I’ve never found that to be a problem on even my hour-long commutes. But I’ve definitely found myself in situations where I wanted more grip. When shopping for commuter boots, find good grippy ones that work well on sandy or smooth but oily pavement. Commuting involves stopping and starting far more often than any other motorcycle-related activity, and we’ll use that grip.

Combining the various petroleum products on the roadway with the commuter riding pattern is a particular problem. The soles on our boots end up contaminated with oily substances that reduce traction and we’re more likely to be setting our feet down in spilled diesel or oily patches in the first place.

While all of these things are true, there are some important mitigation strategies. Some large vehicles have engines mounted in interesting ways, but most vehicles have a centrally-mounted engine. That is, the engine is mounted roughly midway between the wheels. This puts the oil sump and transmission somewhere in the center 60% of the vehicle width. This means in areas with heavy traffic, you have an oil track down the center of most lanes. Obviously, that lane track is going to be sub-standard for making the most of your braking distance. Which also means yours boot occasionally has to go there.

One of the concerns with getting a lot of oil and solvents on rubber soles is the degree of degradation. Our boots can be rather spendy, and if the grit, grime, and grease of the roadway are eating up our soles, they won’t last long.

The Vibram Corporation, also the maker of very strangely-shaped toed shoes, is known for manufacturing an oil-resistant sole. Not being a life-long motorcycist, I knew about Vibram soles long before I rode. The respect for their products is notable across many industries. You’ll likely find Vibram soles on the more expensive boots, and for full-time or long-distance commuters they’re a worthwhile investment. Best of all, unlike many boots that run a fully-molded sole, Vibram soles are often replaceable.

If the Vibram soles don’t suit your preferred boot style, check for “oil-resistant soles”. These are manufactured with rubber specifically formulated to resist degradation from oil. If you see “oil-resistant shoes” listed, look carefully to ensure that the sole is included in their list of what boot components are oil-resistant.

While you are not as likely to fall over during a commute as a dirt rider, street bikes weigh a lot more and the pavement is far from forgiving. With the frequency that the motorcycle commuter ends up in stop and go traffic in dense urban areas, ensuring your boot has ankle protection even with a low-top motorcycle shoe is a must.

If you live in a rainy climate, trust us when we say you don’t want to skimp on waterproofing. You don’t want to cheap out on weather resistance and get caught in a downpour. Nobody like to squish around in our moto-boots all day. If you spend a lot of time commuting in the rain, consider boots with a synthetic leather upper. This eliminates the chance of cracking in full-leather uppers and reduces the maintenance commitment required by full leather construction.

Conversely, in warm and dry climates, vented sport riding boots are a good bet. You’ll care far more about getting airflow onto your feet, and sport boots will work well for most any style of riding short of forward-control cruisers and fully off-road dirt bikes. Sport riding boots also tend to have the highest levels of protection for feet and ankle (short of full motocross boots) due to the track focus and its associated risk of high-speed dismounts.

Low-cuff commuting or urban riding shoes often come with steel insoles to provide additional stiffness. These shoes will often be easier to “pass” when in professional environments, but don’t provide shin protection from impacts and are definitely a gap for any rain to get in.

Boots that are particularly sport-oriented will often have very stiff leather and articulated joints at the ankles to ensure sufficient range of motion that is limited to the axes where it’s needed. These boots will usually not have steel plated soles, as the chassis of the boot is rarely taking the full weight of the rider when compared to Adventure-style boots.

Watch for boots with laces, as they can catch in your shifter or brake pedal and prevent your foot from moving. It’s probably not life-threatening, but it’s never a great idea for your bike to fall over onto your leg when you come to a stop. And let’s not even get into how embarrassing that is.

Make sure that the fabric of your boot is stiff enough to break in and still protect afterwards. You’ll be wearing your commuter boots a bunch, and if the fabric is too flexible and easy to move within a week or two of first wearing, it will loosen up further and offer less protection as it breaks in.

Be sure that any straps on your boots aren’t thin enough to get stuck on the shifter or brake pedal. The leather straps are a little more hazardous than something as thin as a shoelace, and you’re perhaps less able to get your foot out of the way before the bike falls on your ankle. And if your boot doesn’t have ankle protection, that’s going to be a bad time.

Honest, that crunching sound is a noise you never forget.

Living with Your Motorcycle Boots

There’s a handful of options here that need to be discussed. Most options center around running the gauntlet from motorcycle to where you change footwear (if possible), and whether you can store boots at your desk or locker.

This all gets a bit fuzzy, and you’re going to have some tradeoffs. If you go for the big stompy boots, you’ll probably need a set of shoes kept at work for office life. But there are options available that should pass as proper professional footwear. You can find boots look like wingtips and others that look like regular hiking shoes, including some that look like Chuck Taylors. While many of these give up some protection, you won’t need to carry another pair of shoes. This is even more important if you can’t stash them under a desk or in a locker.

Similarly, if you need to walk around all day and have no place to change, you’ll be putting all those step repetitions in on an expensive set of footwear. Worse, that footwear is maximized for a single use case. It’s designed to limit your range of motion and easily gets broken down.

Stiff motorcycle soles designed to keep your feet safe usually aren’t the most comfortable either, so your feet are more likely to hurt after a long day of walking around.

This is a use case where the more-traditional Engineer’s Boots may be a better fit. The standard styling of Engineer’s Boots don’t have the specialized armor typical of sport or dirt boots. What those boots lack in armor is made up for in robust leather. Robust leather that should last you many years and stand up to some abuse.

While it seems a bit annoying, I suggest another pair of shoes at your workplace. While we all get to make our own fashion choices, this should not dissuade you from selecting “passable” boots. Wearing garishly-colored or big clompy boots into some establishments might be problematic, but they’re usually safer.

But foremost, take care of yourself and then care care of your boots. You get more mileage out of boots if you don’t abuse them, but you only get one pair of feet.