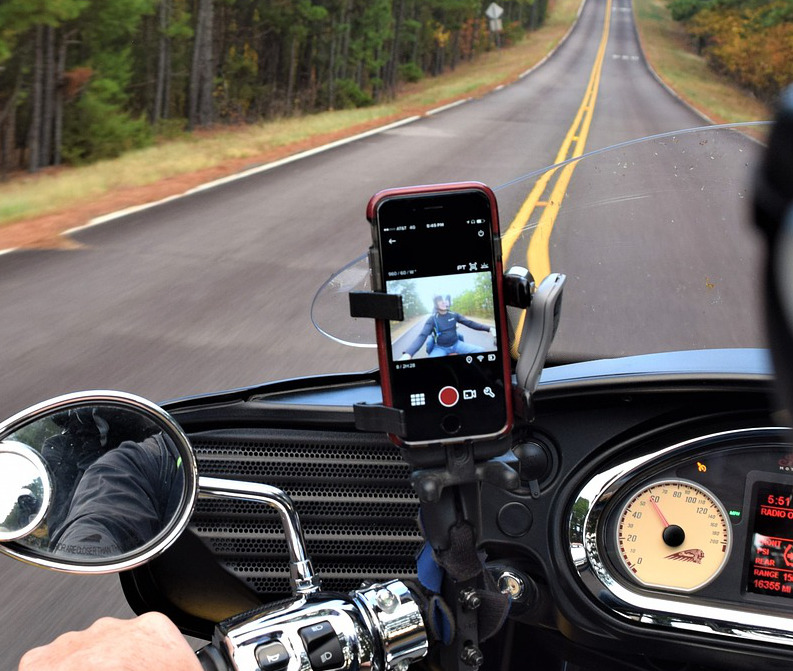 It’s a fairly obvious statement that riding while mixed up with traffic on busy city streets is somewhat more hazardous than a calm and pleasant bimble along open county roads. It might seem reasonable that anything that takes your attention away from traffic while commuting must be considered a bad idea. But approached with the right mindset and a generous dollop of care and forethought, some technical rider aids might make your commute safer as well.

I don’t really need a “tl;dr” for this farkle. Some folks swear by Radar and Lidar detectors for while commuting, but I’ve never found a situation where speed limits and enforcement were a limiting factor of a safe commute. If I’m moving that fast that I’d normally be concerned with getting pulled over, I’m also rolling along at that brisk pace with other motorists and don’t stand out from the crowd. With the low net value of radar detectors in this scenario, I can’t recommend them or recommend that you leave that particular distraction turned off. The beeping of false positives in urban areas with all of its increased radio emissions and reflections off buildings reduces their effectiveness anyway, and low-value interruptions are an obvious drawback.

Besides, that detector isn’t any use at all if they’re measuring your speed from an airplane. Keep you eyes peeled for the distance markers on the shoulder and you’ll know when to roll off for those.

A somewhat less controversial farkle, the GPS, is not necessarily a universal boon either. GPS devices, and especially smartphone-based GPS apps, are constantly trying to send us onto various experimental routes.

While these might work great in some situations, remember that those reminders are for the software vendor’s benefit as much as yours. If you already know the best way there, try slipping a piece of paper into a tankbag map sleeve. You can glance at the directions and stay aware, and just leave the routing function of your device turned off.

I’ve also found auto-routing is less reliable than I’d like in Seattle’s new gnarly traffic flow. I just leave the app running with a display of traffic density on nearby roads. It’s much more useful and none of the drivers aids try to get me to take random exits. And while we’re much less likely to come to an unfortunate end as have many who slavishly followed their GPS routing into snow-filled forests or large bodies of water, it’s still best to have a solid idea of how to get where you’re going before you set out.

Disclaimer: At Motorcyclecommuter.com, we have been happy Garmin users for over 15 years. Mostly running slightly-dodgy used Streetpilots and Etrex handhelds, but recently upgraded to a Zumo XT. You may find that other vendors serve your needs just as well as Garmin has ours.

Tele-Farkle: Can You Hear Me Now?

And that brings us to phones themselves. For the past couple decades, motorcycles have served as a more-solitary and focused mode of transport. With the advent of some new technology stuffed into modern motorcycles, we have to contend with the same interruptions as car drivers.

Honda, Indian, and Harley-Davidson have all introduced models that use Apple’s Carplay and/or Android Auto system in recent years. Several other manufacturers provide the capability to connect smartphone apps to the motorcycle to modify certain functions and machine performance. All of these are a tempting set of widgets to fiddle with. Widgets that are invading from the non-motorcycling aspects of our lives, whether phone calls from co-workers or social media updates.

For motorcycle with a sporting focus, some machines now connect phones into the CANBUS, IMU, or ECU systems. Some bikes from Suzuki and Kawasaki even allow riders to record their lean angles or change power profiles. Some even allow suspension adjustments without hopping off the bike. Indeed, it can be quite fun to poke at the MotoGP-level stats after a recent ride. Far more convenient to poke at your phone than to whip out T-handles and wrenches. Keep in mind that the increasing levels of smartphone and vehicle interaction can also pose a hazard. Especially if the second screen goes from add-on to dependency.

And foremost, very little of that business makes your commute safer. If your phone has it, it’s best to set “Do Not Disturb” while riding. We don’t really need our elbow joggled while we’re riding. It might not seem like a big deal, but 60 miles per hour is 88 feet per second. Mark that out on a nearly sidewalk and walk it. That’s a long way to travel while you’re poking at your dash or your phone.

Note: Mounting your phone on your motorcycle can have deleterious effects on its camera stabilization.

Toasty On The Inside

This is one farkle that we can really get behind. It’s a godsend on cold damp mornings hovering in the 40s when the chill gets into your bones.

It’s heated gear, of course. And as long as you’re not taxing your charging system with a whole constellation of other farkles, you’ll be able to keep warm while rolling down the freeway or quiet country roads on the shoulder seasons.

We especially recommend heated gear with remotes or bike-mounted switches, also. Several manufacturers sell controllers to adjust the heat right from your handlebars.

Some of the bargain brand options have switches and buttons in strange spots. Some of these are in quite concerning places, like on the glove cuffs or on the heated jacket liner’s hem. Both of these are very odd. Your riding jacket’s cuff might well interfere with your heated glove settings. Conversely, a heated jacket liner probably isn’t going to stick out from below the flare on a 3/4-length riding jacket and you have to fiddle with it. Fiddling with a poorly-placed farkle being shockingly dangerous at a freeway speed of 88 feet (27 meters) per second.

And if you live in a northern clime, consider this in the same category as safety gear. On a damp 40F/4C day the wind chill acting open your body could be well below freezing. Perhaps you’re tougher than most, but that’s a hazardously cold commute. I’ve spent many an unpleasant chilly commute home on days when it was nice in the morning but dark, ominous, and damp by the end of the day.

Motorcyclecommuter.com does not endorse these vendors, specifically, but heated gear may be found at Warm ‘n’ Safe and the Aerostich store.

An unpleasant fact for today’s moto-commuters: Today’s family sedan has more power under the hood than most sports cars from the 1990s. It’s a noticeable change as today’s multi-ton missiles barrel down the road. Particularly here in the United States, where drivers have gotten both more aggressive and more distanced from traffic in their sound-proofed cars.

They’re also likely to take out their rage on random drivers that they encounter using all that new-found horsepower. A Dash Cam doesn’t do much to prevent such incidents (if anything even can), but it can create a record of events. Chosen carefully and mounted appropriately, video is vital proof of what happened. Whether you plan to seek damages from the other driver or defend yourself in court, video trumps hearsay. And as crazy as that might seem, law enforcement has traditionally been somewhat less than objective where motorcyclists are concerned.

For convenience, many of these systems today wire up into your bike’s electrical system directly. The better units with unified front and back cameras and a controller unit with video storage under the seat. And pricing on these camera systems, there are affordable choices under $200US with premium models up around $300 or so.

If you’re strapped for cash, you might be able to make something work out. If you have an old GoPro hanging around that doesn’t cut it for high-end action photos or video anymore, try that out. You can get some benefit from it by putting it on your helmet so that it sees what you see.

Granted, this is a bit problematic if you habitually exceed the speed limit. The video also serves as excellent evidence of own your sins if the dash in the field of view. But that video may prove useful in the garden-variety incidents with clueless car drivers pushing you out of your lane.

Obviously, use common sense when riding your motorcycle. Don’t fiddle with distracting farkles like GPS or phones when rolling in busy traffic. For newer riders, we suggest starting with farkle purchases focused on safety measures that are suitable for your commute. Experienced riders have learned whether a given gadget is better suited for a 30-mile mellow backroad cruise or a hectic 35-mile freeway combat commute fending off hordes of Camrys and pickup trucks. If you’re not sure, we encourage you to seek out local communities of like-minded moto-folk in your idea. All of these ideas are honed and improved when we share experiences and ideas with others.